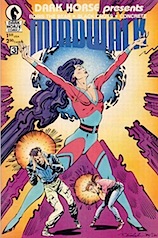 Yay, Warner’s back with Black Cross–featuring a bunch of expository dialogue recapping the first story. With all that useless exposition, one might think Warner would explain the ground situation to the reader. But he doesn’t. It’s confusing and a lot of work thinking about something so dumb sounding.

Stradley and Emberlin’s Mindwalk has its weakest entry so far, with Stradley inexplicably using two narrators here. A mediocre first person narrator is one thing, but then he brings in a female narrator who sounds like a six-year-old. Emberlin’s art is similarly problematic, though he draws Kirby-esque monsters well.

The Concrete story is charming. It’s the adventures of the female scientist (still not clear on Concrete’s origin, which seems to be intentional) trying to move his unconscious body. Chadwick’s art is gorgeous.

The Boris Chronicles strip is cute, with Smith basically converting a newspaper strip to four pages.