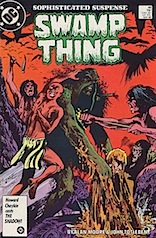 For an end of the world comic, this one’s sort of tame. I guess the world itself does not end here–only a serious foreshadowing of it, especially since Swamp Thing unintentionally helps the bad guys towards that end–but it’s still very dreary stuff.

Yet, the most awful thing in the comic is the cops dragging Abby out in cuffs. They arrest her for cavorting with a swamp monster.

That subplot, which only shows up in the last couple pages, shows the problem… if the world’s going to end, why is Moore spending time on Abby’s problems?

Obviously, the DC Universe isn’t going to end, but Moore’s still supposed to be convincing the reader of that possibility. By expanding Abby’s subplot, which he should be doing under normal circumstances, he draws attention away from the apocalyptic angle.