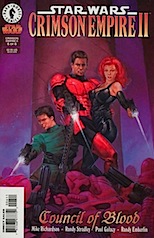 The series ends with some undeniable problems–the Romeo and Juliet aspect is idiotic–but Richardson and Stradley manage to reign in their big conspiracy storyline.

They don’t resolve some of their threads, which is both a good and bad decision. It’s good because there’s not enough room for the resolution, but bad because they sort of promised it for the first half of the series.

There’s a lot of content to this issue–it’s not just a wrap-up. The wrap-up is saved for the last three pages or so… and it isn’t enough. This issue’s problems with pacing sort of reveal the series’s problems with it in general.

Gulacy is rushed here. He can’t make it all fit. It’s the least impressive art on the entire series, though there are some good space battles at the open.