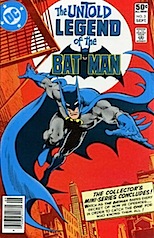 Untold Legend limps across the finish line. Aparo’s art doesn’t even maintain interest (his “handsome man” standard is really boring and in this one a lot). But it’s mostly because Wein doesn’t have any interesting flashbacks this issue.

There’s Commissioner Gordon, which should be more interesting–it briefly recounts Gordon’s time spent hunting Batman–but Wein doesn’t give it enough time. Then Batgirl gets a few pages. Again, not paced well and quite absurd. Gordon’s standing around his office talking to himself about his daughter being a superhero.

Then the final flashback is Lucius Fox for a page. It’d be pointless if there were any point to Untold Legend except as a primer for new or returning readers.