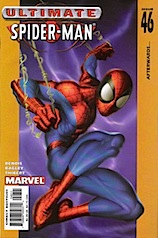 This issue is a prelude to Ultimate Six, with Bendis focusing on Sharon Carter and her take on the last time Spidey fought Doctor Octopus. Turns out Ultimate Sandman was there too.

Bendis can get a little mileage out of it being an untold tale, but the comic’s fairly limp. Spider-Man’s outgoing personality comes across as forced and unlikely.

Carter is an awful protagonist for the comic, alternating between unlikable and mentally unstable. Of course, Bendis understands she’s a weak lead, so he gives Bagley maybe six double page action spreads to do.

The best part of the comic is probably Flint Marko’s expressions and it’s unclear who came up with those, since he doesn’t talk.

All Bendis had to do was a solid prequel to an event and he flops. Ultimate Carter is just a lousy character. The issue makes one want to avoid Six at all costs.