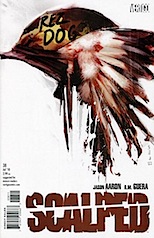 Aaron sure does expect a lot from his readers. I was almost through the issue before I remembered Wade is Dash’s dad. I thought it was an unlikely Falls Down flashback.

The issue takes place at the end of the Vietnam War, with Wade working the black market and romancing a local girl. It’s the best frost person Aaron has written in Scalped, even better than his occasional Lincoln first persons.

It just goes to show the series’s salient problem–Dash is poorly realized character. In one issue, Aaron does a better job realizing Wade than in thirty-some with Dash.

The issue is one of the series’s best, both in writing and art. Guera really captures the desperation in the battle scenes and the subsequent “regular life” ones. Aaron doesn’t try for profundity, just earnestness and the result is a sublime issue.

Shame it’s a done in one though.