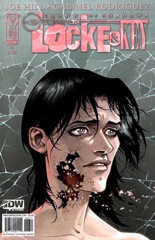 I’m not sure this issue’s actually better than the last great issue a few ago, but it’s incredibly impressive. Instead of resolving anything big, Hill goes after something small and makes it as big as possible.

It doesn’t start off seeming so incredible, of course. It’s already different because the mom gets to see some of the magic of the house and then things go very, very wrong.

What’s great is how Hill mixes the mundane with the fantastic. The mom’s alcoholism collides with Kinsey’s inability to experience fear. Then the rest of the family gets into it–actually they’re there already but whatever. It’s maybe the truest scene Hill’s written in Locke & Key–I say maybe because I can’t remember it well enough, but let’s assume.

I didn’t think Hill had it in him. It doesn’t play into the series’s expectations at all. It’s wonderful.

Hansel, the cult leader, again gets his own scene juxtaposed against the regular action. Once again, it doesn’t work. Everything else this issue works–except one flashback panel requiring the reader to remember minutiae from the arc’s first issue and a revelation scene–but the cult leader is a constant problem.

Brubaker can’t make him interesting. He’s scary, he’s disturbing, but he’s not interesting. He’s just a bad guy. There’s nothing else to him. If he were addicted to Big League Chew, Fatale would work much better.

Anyway, the issue’s successes. Miles and Jo have a nice chemistry to them as they navigate the issue. It’s occasionally domestic, sometimes nearly cute. Brubaker makes Jo extremely sympathetic. The guy a little too, but nowhere near as much. It’s a damsel in distress story, even if there are a lot of damsels and the distress isn’t clear. 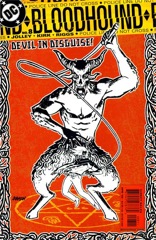 Agent Bell gets the most character development in the issue; more of a past revelation, but it makes she and Clevenger’s partnership a lot more interesting.

The issue mostly takes place in a small Southern town where the FBI suspect a metahuman arsonist. There’s a lot of investigating, a whole cast of guest stars and a lot of personality to the town. Kirk and Riggs outdo themselves on making the mundane visually engaging.

There’s a big action set piece at the end of the issue, along with a lot of mysterious goings on. Jolley finds a great formula for the issue. It feels like a good procedural show.