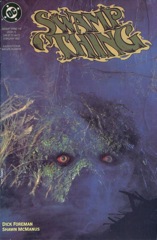 Guest writer Dick Foreman tries a little hard to be precious, but the issue’s still a success.

Foreman and Shawn McManus tell a traditional boys’ story. A kid with a crappy, absentee father discovers a Swamp Thing body and plants a still living tuber. The tuber grows into something magical–Foreman doesn’t mention it, but the anthromorphized plant inards suggest it’s too old a corpse… from pre-Alan Moore.

But Foreman’s not going for continuity, he’s going for a solid little story. McManus helps a lot with it, making the mom likable just through that sad but happy McManus face. And the kid’s sidekick is a lot of fun in his few pages.

Then the dad gets home and the story takes some predictable turns and some unexpected ones. The end should be better but Foreman tries to hard.