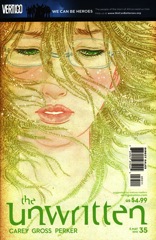 Maybe Tom seems like an action hero because of his outfit. He’s got suspenders for some reason, looking a little like Bullitt.

It’s a Tom and Pullman issue. There’s some action, but there’s mostly just Pullman messing with Tom. Pullman–and Carey–promise some great revelation, but it’s unclear how much of it Pullman is just keeping to himself. The issue doesn’t exactly raise questions about Leviathan and the nature of the universe, but it doesn’t answer any either.

There’s a big change–possibly two–for the series at the end (and maybe even some little ones throughout). Carey, Gross and Perker do such a good job throughout, one can ignore the entire arc has basically just been a way for Carey to soft reboot the series. He could just as easily done a “One Year Later,” since he doesn’t even bother with subplots this arc. 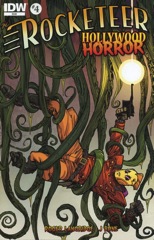 Everything ties up nicely for the finish. I’m still trying to determine how Langridge made this take on The Rocketeer. He’s turned Cliff into a young doofus, added Groucho Marx as the narrator and so on… yet it’s definitely the Rocketeer.

There’s a big action scene to resolve everything. It takes most of the issue and Langridge has to fill it out with some minor twists and turns. Some of his intimations are still too vague for me–though I think maybe Doc Savage makes an appearance.

Without being identified, of course.

Langridge and Bone should be very proud. There are all sorts of great little details, but the overall result is outstanding too. It’s an excellent series, start to finish.

Let’s see. Of all the lame turns in this issue, I think Tefé all of a sudden being old enough to form questions is the worst. She’s concerned about Alec, who has rooted in his sorrow at Abby’s leaving him.

Abby, meanwhile, has already found a new romantic interest thanks to Constantine. It’s all very contrived–and unclear how the new guy is a better choice for her than Chester, except maybe he’s taller. Collins is all of a sudden cheapening the relationship between Alec and Abby. It’s unclear why, especially since it’s requiring her to make big changes in the characters. Not just as how others wrote them, but how she herself did.

Oh, and Arcane is possessing Sunderland. It combines Swamp Thing’s two main villains, but removes half the personality. It’s a really lame move, like all the other ones this issue.

The comic’s become a train wreck.