Ramon Sola does the art on Flesh and all of a sudden it looks great. The dinosaurs, the landscapes, even the cowboys. All the strip needed was good art to make it palatable.

Belardinelli handles the art on both Dan Dare and M.A.C.H. 1. He doesn’t do a good job on either, but Dare is better thanks to the space scenes. He can draw the space stuff, just not humanoids interacting.

Invasion is okay enough–Blasco’s still the best art. The writing’s a little wonky, but not terrible. Harlem Heroes is inoffensive sports stuff, if a little dumb. And Gibbons’s art is problematic on the athletics.

Judge Dredd, with Kelvin Gosnell writing–McMahon is still on art–is little better. It helps if one reads it as some kind of riff on a Dick Tracy comic strip, some comedically self-aware future one. 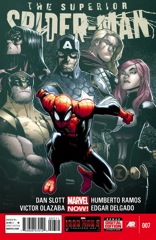 This issue Ghost Peter discovers he can influence his old body and also make enough noise to distract Otto. Sadly, Slott uses that trick three times at least this issue to save someone from Otto’s wraith. Well, maybe twice with the third just being a little wink.

But it’s not a particularly good issue. In fact, it’s the first one where Slott doesn’t deliver a worthwhile narrative. Otto beats up some superhero who steals medical equipment to save poor people and then the Avengers confront him.

There’s nothing else to the issue. It’s a short opening, a long, poorly illustrated fight scene with Otto’s megalomania taking over, and the Avengers finale. And that finale’s just the cliffhanger.

Subplots aren’t just absent, Slott doesn’t even acknowledge the series has any.

It’s a rather upsetting turn of events. I sort of thought Slott could do no wrong on Otto’s adventures; he can.

Now solo on the book, Millar’s approach is to make Alex the lead. He’s cut off from the Green and, for whatever reason, Millar’s not bringing back the supporting cast from before Collins purged them.

And then there’s the new power–Alec can form himself human bodies now. He’s hanging out in New York dressed as Matt Cable.

Millar is going back practically to the first series; I’m not sure Abby is mentioned by name while Linda Holland comes up multiple times. It’s a little uncanny, with Hester’s art working beautifully for the vibe, and it’s new. Millar might be ignoring continuity, but he’s making everything unpredictable.

There’s a bit of talk about Gotham–the biggest continuity tie–with the government hiring a monster hunter to go after Swamp Thing. And the Parliament of Trees, which used to be so hippy and loving, is also after Alec.