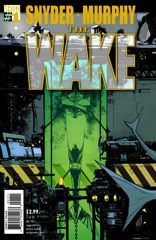 So if Michael Bay is his generation’s version of Tony Scott, Scott Snyder is trying really hard to be his generations version of early Brian Michael Bendis. The cuteness in the dialogue is hilariously bad. If it weren’t for Sean Murphy’s art, one might think The Wake is supposed to be a comedy.

I could actually sit and write about the dialogue devices Snyder uses to be cute, but I won’t bother. Being cute is a small problem compared to the rest of the dialogue. He can’t write honest dialogue. He’s not just writing bad expository dialogue, he’s writing weak dialogue without any sense of his characters. Maybe his editors told him everyone has to sound different so he picked some phrases and cadences to repeat.

But there’s the art. Murphy gets to do fake super-science, general ocean life and Waterworld. Every panel, even with dumb dialogue, is glorious.