Mary Mitchell is an odd choice for the comic. If her lines were messier, it might work better but she has a very cartoony, clean style. All of a sudden The Maze Agency looks like a reductionist Disney cartoon.

It’s occasionally interesting looking, but would work better for a backup story not a feature. Especially since Mitchell doesn’t handle certain standard things–shoes, for instance–well at all.

The mystery once again gives Gabe and Jennifer some tension in their dating life. They’ve both sold true crime books, but she’s sold hers to a big publisher, him to a not big publisher. Barr enjoys writing about their relationship problems, but there’s always something missing. It’s like he doesn’t imagine them having a life when they aren’t in the comic… They don’t have any texture.

So, in short, it’s an odd looking comic with some problems. The supporting cast really shines. 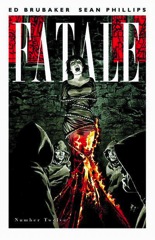 This issue takes place in thirteenth century France, with a Joan of Arc-type character turning out to be connected somehow to what’s going on with Jo. Maybe not connected, but definitely similarly afflicted. There are only the slightest hints at what’s actually happening with her–demons in the sky–because Brubaker instead has it play as an idyllic Bride of Frankenstein hermit and the monster story.

Except all the violence. There’s a whole lot of violence; the issue opens with some guys burning the lead at the stake. Then the hermit shows up and it’s like the violence has gone, but Brubaker actually just has it building, simmering under the surface. It’s a great done-in-one. I said before Brubaker always does these issues well, but he’s getting better.

And the Phillips art is just beautiful, whether peaceful forest in winter or bloody action sequence.

Did Ditko start the thing where Spidey squints and his eyes change size? They overdo it today (and have since the late eighties) but there’s a little of it here and it works. He works rather well as a guest star. Bendis has a lot of fun writing Peter play off other superheroes.

And by guest star, I mean Bendis has basically given this issue to the Ultimate X-Men and allowed Spidey to guest. I suppose there are a couple things making it more his issue, but no… he’s guesting in his own comic.

It’s a mildly entertaining comic too. He’s on this island, fighting bad cyborg guys, running into X-Men. So for every new bad guy, there are more good guys to fight them. Dumb fun.

It’s like a video game, actually. Maybe Bendis originally wrote it for one.

Bendis’s ambition for the series, however, is kaput.

I’m going to regret making this statement. I’m liking Robocop: The Last Stand. At first I was confused with the art choice–Korkut Öztekin has a punky, very indie art style and it doesn’t seem to fit Robocop. But it works. He goes for these great caricatures on the characters, who writer Steven Grant is writing as caricatures anyway.

So the art works.

The issue I had, first off, was Grant apparently doing a sequel to his years old Robocop 2 adaptation from Avatar. I don’t think it’s an exact sequel and Grant doesn’t waste time recapping or even doing exposition. He does a fantastic job leaking details about the new ground situation–Robocop is a renegade out trying to help people, Nancy Allen is dead, the evil corporation is after Robo.

There’s also a terrible cliffhanger. Grant doesn’t even try to make it dramatic. He just stops the comic.

So Carey has his best issue and Casagrande has her worst.

One of the nuttier supervillains whisks the protagonist off to her temple and Carey spends half the issue introducing some really dense mythology into the comic book. He also explains some of how the protagonist’s powers work–and lets a couple of his friends know about them.

The mythology gives way to problem solving, which leads to a fantastic conclusion. Unfortunately, Casagrande draws the protagonist rather awkwardly. He’ll occasionally appear squat in the talking panels. It makes the entire comic, even with the stronger art in other places, seem ugly and cheap.

Sadly, the one thing Carey doesn’t do well is bring in the protagonist’s family. They’re still a pointless addition to the comic as he doesn’t interact with them. He talks about them, yes, but Carey’s just using them as damsels in distress. 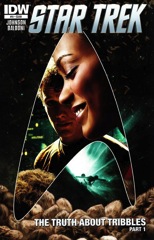 For the Tribbles issue, Mike Johnson goes for humor, which is appropriate.

It’s definitely not a direct adaptation of the original episode, as it features the Enterprise finding the home world of the Tribbles and the beasts who keep the ecosystem in check.

There’s a flashback–I think–at the beginning to the Star Trek movie, then it cuts to Chekhov and Scotty messing around with a tribble on the Enterprise. The ship immediately coming across the tribble planet is a tad contrived. I guess Johnson doesn’t worry about those things.

Claudia Balboni does fine on the art. The planet is interesting looking and the beasts who eat the Tribbles are cool. Almost nothing happens on the ship itself except talking heads, which Balboni does all right.

Johnson’s clearly trying to tell this one with some humor but it seems like he doesn’t have good pacing breakdowns for his cast.

So did Boom! cancel,Cataclysm, did the writers quit or did the license go away? Something obviously happened. This issue jumps three years ahead of the previous one, then another five years from where it opens.

Bechko and Hardman follow Professor Milo (from the second movie) so they can avoid having to have Charlton Heston appear. He gets a mention, but then they focus the issue on what was going on with the spaceship during the second movie. To explain the third, in other words.

It seems like the natural last issue for the series, but they seem to have jumped ahead quite a bit. Cast members from Cataclysm sort of pop in for cameos, but it’s much more a movie tie-in. It’s trying to logically explain what Heston only agreeing to second sequel if the world ended broke.