Odd, odd issue. Lots of too long stories and too short ones.

Invasion and Shako are both way too short. Invasion is dumb and–inexplicably–for laughs. Shako is dumb and serious; at least it has good art from Arancio, who’d have been better served just doing wildlife studies.

Bad Harlem Heroes. Bad Dan Dare. Dare reads really, really long. For that matter, so does M.A.C.H. 1. Dare is just more nonsense with Dare versus the Mekon, who isn’t actually very smart, but M.A.C.H. is this really complicated story about the machine man proving himself in the Middle East. Writer Nick Allen relies a whole lot on the computer talking to the protagonist, which flops.

But not even Dredd works out until the end. Writer John Wagner takes a while to get going. Ian Gibson’s art is good throughout and the story ends well, but the beginning’s weak. 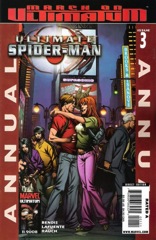 I’m not sure how I feel about David Lafuente’s art. He seems to let the colorist do a lot of the work when it comes to faces. Not sure I’m comfortable seeing that level of brevity from an artist in a Marvel comic.

Not sure at all.

Half the issue is Ultimate Mysterio, who kind of stinks. Bendis is just throwing him in here; there’s nothing to him yet and probably won’t be. He’s got a cloud for a head, which means no jokes from Peter about the fish bowl. Makes me sad.

The other half is Peter and Mary Jane angst. Are they or aren’t they ready for sex. They aren’t, it turns out, because they’re teenagers and Marvel wouldn’t want to be on the news for promoting premarital teenage sex. Sadly, that whole plot line feels like a MacGuffin.

But so does Mysterio. So double MacGuffin. So… what?

There are too many dang people in the main Enterprise cast. Johnson just added Sulu’s sister as a love interest for Chekhov. Why does Chekhov need a love interest? No idea. Johnson’s not doing anything with Carol Marcus and Kirk–probably doesn’t want to step on future movie toes–but come on… When does Scotty get a girlfriend?

The issue opens with a reference to Star Trek VI, which sadly might be the best thing about the issue. Johnson is able to tell original series adaptations–though this arc is apparently more a sequel to Into Darkness–with material established later. Though he could easily go overboard with that practice. Ignore that comment–I’m cringing at the thought of Spock versus the Borg.

Fajar’s art is really bad this time out. If Star Trek isn’t selling enough to pay for a good artist, maybe IDW should just drop it. 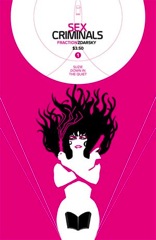 Sex Criminals is about a young woman whose orgasms cause her to enter some sort of time-slowed state where, or so the very soft cliffhanger implies, she commits crime with her boyfriend, who has the same power.

I’m more curious if Matt Fraction was implying she doesn’t have a college education. There was a scene with her and the guy talking and it left that impression. She reads all the books an American lit major would read. The literary references are Criminals’s weakest point, Fraction’s trying too hard.

He does a lot of nice moves through the narrative, with the protagonist telling her story and it jumping back, forward, back, forward. It flows nicely. It’s just kind of shallow. So far, Fraction only has the MacGuffin. Who cares if the protagonist wants to save her public library from the evil local bank?

I’m having a hard time believing it but Snyder is actually getting worse. Oh, there are less characters so the dialogue is a little better, but his ideas are dropping even faster in creativity. If it weren’t for Murphy’s style, I’d think The Wake is supposed to be a joke. Some camp-fest to laugh at all the crazy stuff Snyder can rip off from other places.

I did forgot the really, really terrible scene with the lead character lady talking about her son and how she won’t die unless she gets him HDMI cables first. I can’t believe this comic book has an editor. Not one who can read anyway.

There’s a lot of action, none of it particularly good. For a series where Murphy is the only draw, this issue doesn’t utilize him well at all. Snyder’s script is too terribly paced.

The Wake‘s not improving at all. 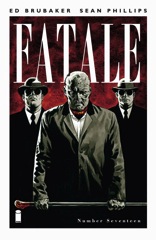 Very different approach this issue, at least to the flashback. Jo is the center and everything revolves around her. Brubaker uses it to move the story smoothly; even the scenes she’s not in are about her. Only the flashback stuff can’t compare to the interlude with Nick on the run.

Brubaker brings back the Lovecraft writer references towards the end of the interlude, with the mysterious book coming back into play. Fatale is only a year and a half or so in and Brubaker has definitely established a deep mythology to the series. But the stuff with Nick and the guy on the run is great. There’s some occasionally iffy narration from Nick, but it’s great.

The flashback, where Brubaker and Phillips go almost more for effect than story, can’t compare. It’s good, but Brubaker uses a lot of easy devices to get the results he wants.

It only took us three weeks for a new episode this time!

This episode, Vernon and I talk about new comic books, a little about “Agents of S.H.I.E.L.D.”, a little about “Villains Month” and quite about where we both fell off with Bendis’s Ultimate Spider-Man back when it was the book to read.

Street gangs versus the Predators. It’s actually a good battle scene. It takes up a good third of the issue; Verheiden definitely comes up with exiting visuals for the artists to realize.

The narration from the family man cop is pretty dang good though. Verheiden never gets into Schaefer’s head this issue and it works out. The family man has a lot better observations about the situation, far more emotionally charged.

There’s a fair amount of events in the issue, so it’s not a breezy read. It takes some time and has definite tension before the big battle scene.

I’m just trying to remember if anything else happens here. It’s build up, action, occasional good dialogue and no depth.

It’s funny how Immonen isn’t very good at fight scenes. It’s like he gets bored with them too fast. Venom versus Carnage, Super Venom, boring. Aunt May pulling a gun on Eddie Brock–awesome.

This issue finishes Bendis bringing Gwen Stacy back to life. Hopefully. She’s fine at the end of the issue, following an entirely unrealistic scene where Tony Stark is able to talk down Director Danvers.

Bendis also returns to Eddie on the park bench. Turns out it was in the future, kind of. Or the present of this issue, which doesn’t work with how the previous issue was set in the present too.

Like I said before, he should stick to his strengths. Aunt May having a gun for protection, strength. Competent multi-layered plotting… oh, come now, Bendis can’t even competently plot when he’s not working in flashbacks.