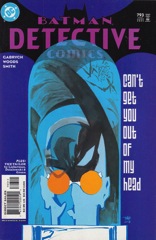 Gabrych spends about a fourth of the issue with Bruce describing the surgical procedure for a cesarean section delivery. Just before the delivery, there’s a long argument between Bruce and some Lady Macbeth crime lord. It’s different to be sure.

A little later, when Batman heads out to fight Mister Freeze, Leslie is shocked at the decision. It’s a slightly meta textual scene, with her stunned he’s all of a sudden going to bring supervillains into their real, tragic situation.

The fight scene is a fight scene–Gabrych has already done the issue’s biggest work–and the Woods art is definitely nice.

He closes off the story with Bruce and Leslie in a nice little scene together. Gabrych is trying to do something with the character.

The backup has some truly awful narration from writer Lieberman. It goes on and on and nothing happens, just setup for the next installment. 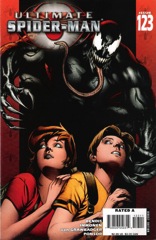 Oh, no, Bendis is going off the rails again. I thought last issue was a fluke, but now it’s a definite thing. This whole issue is Eddie Brock sitting at a park bench, telling people his story, then eating them.

Bendis is demure about the eating thing until the last panel.

Immonen does really good with the art, which makes me think maybe Bendis knew he could branch out more with him on the book but it’s a mistake. It removes Peter from being the center of the book and then you’ve just got Ultimate Spider-Man without its star.

Worse, Silver Sable is back again. Not one of Bendis’s better Ultimate creations. Not as annoying as last time, but only because Eddie’s narrating the thing.

I guess Bendis trying to making Eddie somewhat sympathetic, but he doesn’t at all. Not even with all the sad panels Immonen can muster. 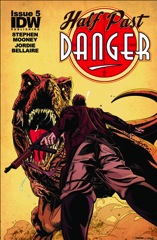 About half the issue is a submarine adventure, which is very cool. Mooney sure does figure out how to work all sorts of genres into a comic about dinosaurs (there actually aren’t any dinosaurs visible in this issue).

And then there’s a big surprise at the end, which I wasn’t expecting–Mooney does really well hinting at one surprise, but not another.

Speaking of Mooney, the sad part is his art falls off towards the end. He gives it away during the submarine sequence. The art’s really simple; the sequence works, but there’s none of Mooney’s action pacing. At the end of the issue it just gets worse; it’d be distressing but the twists are so good it doesn’t matter too much.

I’m sure Mooney will end the series well, even if he’s rushing to finish it. Half Past Danger proves the kitchen sink approach is sometimes the right one.

Ours Is But to Do and Die; writer and artist, Stephen Mooney; colorists, Jordie Bellaire and Ruth Redond; editors, Christopher Schraff and Chris Ryall; publisher, IDW Publishing. 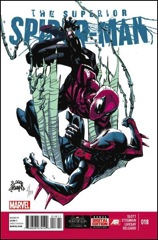 Well, it’s definitely better than last issue but it’s still one of Slott’s weaker efforts on Superior. He’s got a big time travel story and it’s boring; referring to Back to the Future in the issue’s story title and then delivering a bunch of plodding exposition. It’s like he’s promising something good next issue, not this one.

The opening fight between Otto and 2099 isn’t bad, except Otto’s megalomania stops him from actually understanding what’s going on. It comes up a lot throughout the issue, actually. If Otto would just listen, he’d be able to solve the problem.

Why Slott wastes four or five pages on Peter’s lab buddies is beyond me. Yes, it might tie things together later, but for now it’s even worse than the 2099 solo pages.

I knew it was a mediocre one when I was actually getting more interested in Stegman’s art than the story. 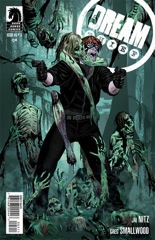 Nitz and Smallwood do the improbable–they close off Dream Thief all right. It’s a difficult proposition because Nitz has been running the series episodically and he’s only got one issue to wrap everything up. Most of the previous issues have nothing to do with this one, except their subplots.

How does he do it? He sort of runs head first into it–and doesn’t give his protagonist (whose name is John, which is probably why I never remember it) any possession arc. He’s just got to explain himself and problem solve as he finds out there are more dream thieves than he thought.

Not a lot of questions get answered and the finish is way too quick, but it’s a satisfying conclusion. Smallwood’s art is oddly cheery in a lot of places.

It might help the issue ends with a promise of a second volume, which is welcome news.