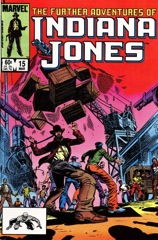 They actually don’t too bad. They don’t do well, but not too bad. Michelinie over writes Indy’s thought balloons for the action scenes, trying to make everything seem logical, so at least one can read instead look at the art.

The story involves Indy running afoul the Japanese navy–it’s pre-war so the animosity is there but not the hostility–which is cool. Sadly, he also runs into some very unlikely pirates. Michelinie would have done far better with just one villain.

But Michelinie does do really well giving Indy a sidekick in Captain Katanga, the smuggler from Raiders. The two men prove a fine pair. Michelinie really does do a good job developing the characters from the source material.

It’s nothing to get excited about, but okay. 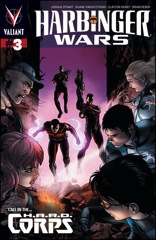 Why am I reading this comic book? I mean, Dysart does script a good issue. It’s a little light, he’s split between way too many things and the issue isn’t oversized, but why am I reading it? It’s not escapism. It’s painfully realistic superhero comics. Introduce this likable character to kill them–seeing terribly abused kids murdered by paramilitary, blood hungry goons–fun times.

Dysart’s relentless with it too. He gets in one joke, from Bloodshot. Otherwise it’s all set up for something terrible to come, with the bad guys revealing in their badness, then showing it off as they kill kids. Then there’s the regular Harbinger duped into attacking Bloodshot and his gang of kids. Awesome.

But there isn’t an inherent seriousness to the series. It’s still kind of an X-Men knockoff, just a desperately upsetting one. Bad corporations killing dumb teenagers. Rock on.

It’s just too much. 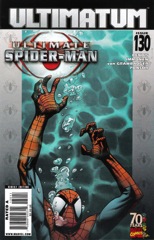 It’s a fast-paced crossover mess of a comic book but it’s not terrible. Bendis gives May a couple good scenes–even though she’s sort of Gordon from Dark Knight Returns in how she’s saving people on the street.

There’s a nice moment for Kitty, a hint of a nice moment for Gwen and Mary Jane. What’s so unfortunate about this crossover hitting now is Bendis finally had his ducks in a row. He had all his characters set up for a nice, memorable run of issues–and Immonen had hit his stride with offsetting the teens against the superheroes too. The characters suffer the most from his elongated pacing; Bendis doesn’t respect his characters enough.

Peter gets nothing to do except swing around in a disaster movie and telepathically chat at Professor X. Serious tone or not… it reminds of goofy Marvel crossovers of the past.

And the awesome is back. About half the issue is an action sequence from Öztekin. It opens with the Japanese android running around the rooftops–here’s where Grant and Öztekin show off how what they’re doing in Last Stand would have been impossible in Robocop 3. There’s a helicopter sequence lifted from T2, for example, but Öztekin amps it up to be beyond what a Hollywood movie could have done in the nineties.

The action sequence is actually mostly just Robocop saving someone in a fire. There’s more to it, with the big storyline about the evil corporation letting people burn, but the action part of it is a rescue. And Öztekin makes it amazing. It kicks off the helicopter fight and other stuff.

Grant’s got some problems writing the kid. She’s odd, which he could get away with if he acknowledged it, but he doesn’t. 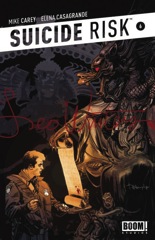 Apparently all Carey needed to do with Suicide Risk to sustain the comic was send it to Mexico. This issue is another strong one, maybe even the best so far in the normal series. I even remember the lead’s name is Leo; I usually forget somewhere during the issue.

There are more bad guys who show up, but Carey doesn’t go overboard introducing them. There’s not a lot of nonsense with Leo as a cop, just as the protagonist in over his head. Carey’s not trying too hard to fit in the exposition. And the annoying family is only in it for a few pages.

The issue hints at a whole lot. The super powered people are maybe shadows of other people–their real selves–something along those lines. Hopefully it’s not The Matrix. There’s a demon from Hell, however, so who knows… anything’s possible.

I hope Carey can maintain.