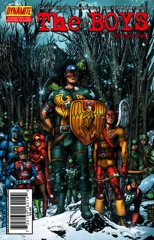 Ennis finally gets to do not just an Invaders story, he also gets to do a war story in The Boys. It’s Mallory’s story, which he’s telling Hughie after Highland Laddie. Oh, and Annie’s around. She and Hughie still aren’t getting along, which is strange because I thought they were after Laddie.

It’s a lot of talking. On and on with the talking, whether it’s Mallory recapping Laddie and telling Hughie about Mother’s Milk and Butcher or if it’s Annie’s rather expository explanation of she and Hughie’s troubles… It feels like Ennis thinks he’s at a jumping on point or something. It’s very strange; I don’t think he’s ever gone so expository before. Maybe it’s because of Laddie.

Until the war stuff, it’s kind of boring. The dialogue’s well-written, just pointless. 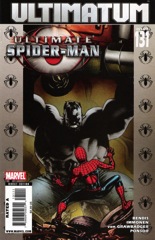 It’s another okay enough issue for a tie-in. Sort of. Bendis again hints at much, much better things if he weren’t being so darn cute with the plotting.

He opens at the Bugle–or the Bugle’s emergency newsroom in New Jersey–and it’s a great scene. There’s some stuff with Ben Urich, then Jonah realizing he’s been a jackass about Spider-Man. It’s just a nice panic scene.

The scene between Jessica Drew and May should be a lot better. Bendis is trying too hard to keep his cards close to his chest. It’s sad their two pages of dialogue is the best May has had in quite a few issues.

As for the main storyline–Peter befriending the Hulk and trying to save people? It’s awesome. It’s slight and messy, but it’s still awesome.

Immonen’s art works rather well for the disaster aspect. 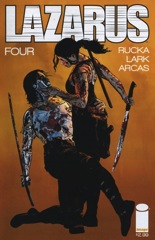 I’m going to have to talk a lot about the Lark art because there’s not much story to discuss. Except maybe how the scientist sister has the hots for the poor boy scientist she works with. Or maybe not. But it did give me another sentence and another sentence is a lot for a discussion of this issue.

It’s an all action issue. As much as I love Lark–and he’s back on the ball this issue, no slacking here–seeing him do prolonged action is boring. It’s amazing if concise, boring if too long. It’s way too long this issue.

There’s some intrigue with the rest of the family, most of it entirely predictable. There’s a tiny character moment for Forever with the other Lazarus, but it’s slight.

The soft cliffhanger’s inane. It’s far from Rucka’s worst script on the series, but it’s a tepid outing to be sure.