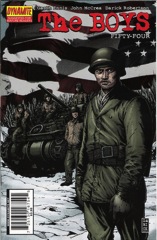 Letting Mallory talk so much has an odd effect on The Boys. This issue is another long read, just because there’s so much information; Ennis covers from the end of World War II to 1985 in Mallory’s life. There are also the hints of Butcher’s deceptions, things Ennis and Mallory are both promising to reveal.

The additional effect is more delicate. Ennis sets up Butcher and Mallory on different ends of a spectrum, but not just as characters, as his creations. Butcher is the expected Ennis protagonist–head-strong, funny, stand up guy to his friends. Mallory is the one who can sit back and think, who is old enough to consider. It’s like Butcher’s the character Ennis is expected to write and Mallory’s the one he wants to write.

It’s a good one. The war art from McCrea and Burns continues to impress, as does Ennis’s narration for Mallory.

It’s tawdry to be sure. It’s got tawdry to spare, but there’s nothing behind it. De Campi shocks for the sake of shocking and the shocking isn’t particularly good. It’s hard to be trashy when you’ve got an impossibly difficult to imagine scenario. Killer demonic bees or whatever. Those are a lot of bees to choreograph.

Chris Peterson doesn’t do bad with the issue other than that choreography. The bees are all messy, never with the detail the rest of the comic gets. But there’s a lack of personality in the artwork too. The comic needs personality–to make up for De Campi not bringing any sincere personality–and Peterson doesn’t bring it either.

Perker and Kristensen continue to embrace the insanity. The Charlie Rose subplot gets much bigger this time around–it probably takes up half the issue, which never exactly feels bloated, just really full. There are two major subplots–Todd pretending to be Sandy, the mom going off to get her boobs done–and a handful of little ones.

It’s hard to imagine where Kristensen is going to go with all these threads or whether he’ll be able to wrap them up. Or if they even need to be wrapped up. Kristensen and Perker have brought things together so far–even Tom Wolfe pops in for a few panels here–but it’s unclear if Todd needs such attention to detail.

It’s a comedy and things can get lost in a comedy.

The issue’s only misstep is the assassin after Charlie Rose. Kristensen underwrites him, relying on the art to cover him.

Jonah, Robbie and Ben Urich head back to the Bugle in devastated Manhattan and Jonah tries to figure out how to write his Spider-Man story. Very human art from Immonen; he toggles between disaster and character drama perfectly. It’s a shame Bendis never grew up and wrote a Bugle book.

Jonah reads about a time Spidey helped out Iron Man. Mark Bagley comes back for that retro story, which is cool. It’s still Bugle-centric (something Bendis never really let the regular series become) and, after seeming awkward, it turns out it’s the perfect fit. Outlandish and grounded at the same time, like the best of Ultimate Spider-Man.