For some reason–editorial interference one suspects–Tarantula takes center stage this issue. I guess she needed some exposure, but Gabrych gives it to her at the expense of Batman’s time.

Gabrych splits the issue between Tarantula, Batman and regular people. He does great on Batman–he even takes the time to do an epilogue to the previous arc, which sadly features Matches Malone. Even with the rest of the Batman stuff tying into Tarantula’s case, it’s good stuff.

The regular people of Gotham stuff is good too much. Gabrych and Woods give the setting a lot of texture to Gotham; Gabrych has a very nice third person voice for his narration. It feels very Batman.

The Tarantula stuff, however, even though Gabrych writes it pretty well… is just a waste of time. Her first person narration is annoying; she seems sort of incompetent.

At least the awful backup concludes. 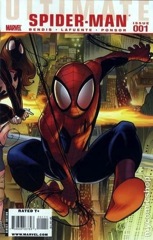 Oh, well. I guess I shouldn’t be surprised.

Bendis starts off the second volume of Ultimate Spider-Man flashing forward six months. Guess he watched “Veronica Mars” too, down to Veronica–sorry, sorry, Peter–dating Gwen Stacy now. Where’s Mary Jane? Well, she’s alive because she’s still on the high school’s news channel, but Bendis is making the reader wait on that one.

The actual story, not Bendis hiding stuff for effect, is Mysterio showing up and killing Kingpin. Bendis is trying to make Ultimate Mysterio a lot tougher than Kevin Smith left regular Marvel Mysterio. It’s interesting, I guess. Bendis never could make his villains work over long periods; killing them is a good idea.

Otherwise, there’s nothing to it because Bendis is doing the gimmick–he’s deceiving the reader instead of telling a story.

Also not getting why David Lafuente’s supposed to be so impressive. Not at all.

And here Spurrier gets to the big reveal, or at least starts to hint at it. For a while, it looks like Gorilla could just be one incredibly long dream sequence–and it still could be–with a bunch of characters out of books the protagonist, Blue, has read running through his mind.

But it’s not a dream, not exactly.

Spurrier handles the reveal quite well, encouraging the reader to imagine all sorts of possible explanations before getting to the finish.

However, instead of the issue being entirely incomprehensible, Spurrier just has one incomprehensible plot development and it sadly matters. He skips over an important detail and it’s noticeable.

The issue races along, but remains a rewarding reading experience.

It’ll be interesting to see how Spurrier wraps it all up. He might have done some of the heaviest lifting this issue, leaving the more action oriented stuff for the finish.