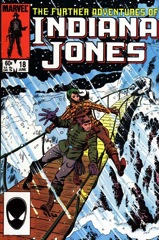 It’s an interesting issue for a number of reasons. It’s a mix of Lost Horizon and Edgar Rice Burroughs with Indy and Marion finding their way to a lost city in the Himalayas. Yeti-like creatures protect the city, which has many secrets.

One of those secrets is the presence of Abner Ravenwood; Michelinie doesn’t resolve that mystery–probably not allowed to do it under the license–but his solution for it is fantastic.

There’s a lot of action and almost no story. The revelations about the lost city are mostly just to move the action along. After one moment of introspection from Indy, Michelinie solely concentrating on the action.

The writing makes it work.

The awful art is sometimes incredible. Trimpe’s little heads are something to see. He doesn’t even do well on the landscapes–but he gets better inks on those panels.

It’s an ugly comic, but decent. 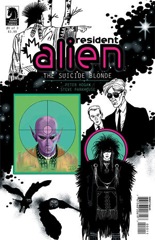 Once again, Peter Hogan goes more towards likable than compelling with Resident Alien. He’s more concerned with his readers enjoying the time spent on the comic than making sure they’re intrigued with the plot.

The biggest moment is when the U.S. government discovers Harry’s ship–there are a lot of flashbacks–and starts worrying about an alien.

Then Hogan backtracks and brings in a whole thing about inter-agency pranks and the government not really thinking it’s an alien. But it was fun to read, even if there wasn’t much actual content.

The end’s nice, with Harry deciding he likes his new life–doctor by day, private detective by night; Hogan knows what he’s doing with the comic. The tone is definitely intentional. I mean, Steve Parkhouse can draw some disturbing stuff and he never does on Alien.

The only surprise is Asta’s Sandman homage costume at the open.

Ennis can definitely still write great scenes. The Butcher “losing it” scene in this issue–it takes up the last three or so pages, but feels like a lot more–is amazing Ennis writing.

Strangely, it comes in an otherwise weak issue. There’s a talk between the Boys and the Seven, just a talk, then Hughie going off the deep end on Butcher at a staff dinner. That scene is particularly weak because Ennis’s arc for Hughie this issue is awful. He starts one place then immediately goes another–Ennis writes him angry, sure, but the final place he takes him doesn’t make any sense either.

There’s some more stuff with the evil company, mechanically moving along its subplot. Ennis is solving mysteries no one really cares about at this point. He’s winding down the series and he’s hitting his plot points, nothing else.

But that last scene… truly amazing.