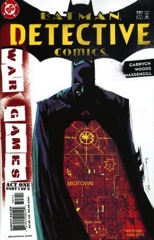 It’s a little hard to take this issue seriously. At one point, Batman is shocked the fighting gang members–this issue is part of the “War Games” crossover event–he’s shocked when the gang members abandon people in need. It’s a terrible, terrible scene. Gabrych goes through a lot of trouble for realistic gang behavior, then makes Batman absurd.

Otherwise, the issue mostly involves Batman and Batgirl running around Gotham fighting various gang members. Trying to calm them down, more like. It’s a lot of awkward, expository sequences. Gabrych’s Orpheus character (Batman’s plant in the crime world) is in it way too much.

There’s also the lame part where DC had decided Batman was an urban legend again and “War Games” revealed him on the TV news.

The backup, from Shane McCarthy, Tommy Castillo and Rodney Ramos, is bad. Riddler and Poison Ivy. Really weak proportions from Castillo in particular.

It’s a really fast read. Hogan covers a whole lot and he’s not doing anything but setting up the rest of the series. It should be an okay move, but he’s already had a zero issue for Suicide Blonde, he’s already had time to introduce things.

Worse, Hogan knows he’s rushing things. He puts in moments to slow down the reader, whether it’s some exposition about a side character, pop culture references to “Frasier” and “The X-Files” or the whole government flashback. The guys looking for Harry haven’t shown up yet in the present. Hogan’s just filling pages with flashbacks.

There is definitely some nice art from Parkhouse. He gets to go more around town than usual and his Americana stuff is quite good.

The comic remains pleasant and entertaining to read, it’s just too slight. Hogan isn’t developing any of the characters. The comic is an awkward procedural. 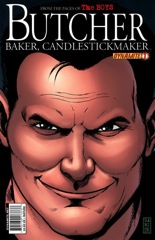 Besides the vaguely obviously device of Butcher narrating his tale to his dead father (in his casket, no less), Garth Ennis does a fairly decent job with this issue. In some ways, leaving Butcher a mystery–instead of giving him Butcher, Baker, Candlestickmaker (way too cute)–would have been better. However, given Ennis opens with Falklands War and then goes back to Butcher’s childhood in the seventies? It works.

Ennis’s big problem with The Boys is his lack of interest. He had a gimmick, he got tired of it, but he didn’t create characters strong enough to support a series without continuously imaginative plotting. Butcher, for example, is a caricature. Ennis hasn’t even given him generic details. So Candlestickmaker is actually something entirely new.

Darick Robertson (late of the regular series) returns; he does an outstanding job doing domestic turmoil and urban squalor.

It’s good, with no right to be. 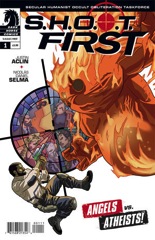 I guess S.H.O.O.T. First is supposed to be controversial. The tag line is atheists versus angels, only the angels are these inter-dimensional bad guys who come to Earth and feed off people’s belief in them.

Writer Justin Aclin explains the situation over and over again. As usual for one of these type comics, the first issue starts with a new team member joining. The reader will get to see this world fresh through his eyes in coming issues.

Aclin isn’t even particularly funny with his observations on faith. He should at least be funny; otherwise it seems like Dark Horse is trying to sell the most impossible movie license ever.

Artist Nicolás Daniel Selma isn’t quite ready for prime time yet. His figures are too blocky, which makes it hard to lose track of their appearance and pay attention.