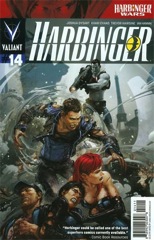 Dysart has an interesting solution for returning the title to its characters. He manages to do it rather cleanly too, extricating it from the Harbinger Wars crossover. Dysart also wrote that crossover and, while this issue isn’t exactly hostile to being a crossover issue, it definitely returns the focus to what the series is about.

It’s about the characters in this book–specifically about Faith and how her attitude binds the team together. Dysart takes his time revealing his structure; it reads like the expected crossover issue, then all of a sudden a narrator with personality shows up. Faith. In some ways, she’s actually the easiest character just because the others aren’t as developed or real–but Dysart always does amazing work with her. Just amazing. He sells it sentiment with her.