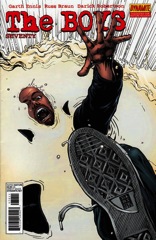 It’s a fast issue. Hughie gets to meet some mentioned, but never seen characters. Well, let’s just say Ennis should have gone the Vera and Maris route because doing a Lovecraft thing? Not the best scene. He can’t even make it funny when he tries.

Ennis resolves two mysteries the series never needed solving. Then he kicks off an ending somewhat akin to the one in Preacher. He has an excuse for it, sure, but it’s the same thing. Only Braun doesn’t go in enough for the iconic scenery to make it work.

There’s also a complete misfire of a 9/11 reference, which doesn’t sit particularly well. Ennis isn’t trying anything with The Boys, something I feared back when it became clear where he was going with things. Even worse than not trying–I just realized he borrows two things from Preacher–he’s not even trying to be witty.