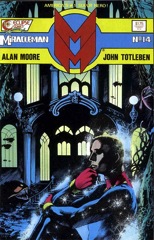 And most of the issue is excellent too. The stuff with the Moran family, the stuff with Miracleman and the other super-powered beings setting up their club… well, actually that decision is Moore’s second most questionable this issue. Miracleman, Miraclewoman, the other aliens, they set up a superhero club, something apparently all worlds with superheroes do. It feels too obvious.

The real problem is with how much abuse Moore throws at Billy Bates. He’s been being tortured by other kids for a number of issues now, always resisting the urge to turn into Kid Miracleman. Moore goes too far with it; it’s too much torture. Moore’s practically martyring the kid.

The bookends flow throughout the issue; during one recollection, Miracleman dances. It’s crazy, fantastic; easily makes up for the bumps. 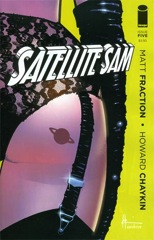 Fraction and Chaykin go for a rather distinct–and mature audiences–sight gag to repeat through the comic. There’s really some great art from Chaykin, who takes three people through hearing or seeing uncomfortable or unwelcome news and events. The whole thing is in their expressions and he nails every one of them.

It makes up for the second of the visual gags being a little too tacked on. It’s not easy because Fraction and Chaykin go out of their way to make it uncomfortable, but it’s tacked on. With so many subplots, Fraction’s going to have at least one weak one.

As for the main plot, the mystery of Satellite Sam, Fraction isn’t concentrating on it. Oh, sure, there’s investigating this issue, but that investigation has more to do with the investigators than the mystery. It’s fine, just a little drawn-out.

Some beautiful Chaykin cityscapes this issue too. 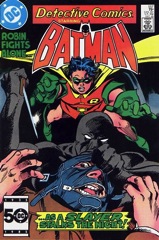 I think Smith’s got to be doing more of the finishing these last few issues. The panels are much smoother than usual Colan panels.

Again, absurd melodrama and, again Moench makes it work. Batman’s proclamations of love for Catwoman work even better because she hasn’t been a character in the comic for so long. Moench’s parade of other women for Bruce and Batman have distracted from her. Better yet, her absence means Moench didn’t have a chance to mess her up like Vicki or Julia.

There’s a lengthy recap from Bullock regarding Catwoman and Nocturna. It’s sort of a waste, sort of not. The art’s good and Moench writes Bullock dialogue well. Then the comic just sort of becomes talking heads. It’s definitely a bridge story, but good art and ambitious superhero melodrama writing make it worthwhile.

As is usual, Green Arrow has some silly writing and some good art. 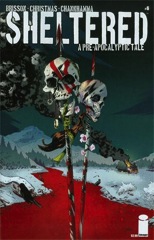 And here we get the first issue outside the compound. A guy has to deliver some solar panels and Brisson spends the issue going through his troubles, his friends’ troubles, his family’s troubles–when he finally gets to the last issue’s cliffhanger to resolve it, he only has time for a few pages before the next cliffhanger.

One might wonder where Sheltered is going now. There’s a lot of character work this issue, a whole lot, and it’s all on new characters. It’s probably Brisson’s best work because he’s not trying to show nutty people, just regular ones.

Similarly, the regular life stuff, which accounts for at least three-quarters of the issue, is very nice as far as the art. I don’t expect Brisson and Christmas to flex their creative muscles–the series seems very confined in where they can take it–but this issue pleasantly proves me wrong.