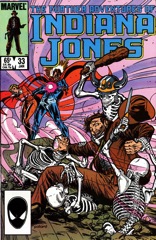 This comic book is not a good one. I do not recommend it to Indiana Jones fans or even thirties adventure comic fans and certainly not to comic collectors. However, I do recommend it to anyone who ever liked a Steve Ditko comic. I realize that category probably overlaps with the ones previously mentioned but, in that case, such people need to relax and enjoy.

It’s a familiar story–hero in a strange town–with the Indiana Jones and period dressings. That situation gives Ditko a lot to do, starting with talking head confrontations. Marvel must have been targeting younger teens with Further Adventures, but this story plays like an old chaste horror comic. Only it’s not and it’s got this lazy Ditko art, inked very roundly, and somehow it’s all magnificent.

There’s even an excellent moment from Grant in it; she’s learning how to present her characters. 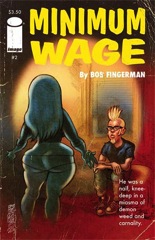 Minimum Wage is sort of like a sitcom where none of the people are particularly attractive or particularly funny. They aren’t actually funny with each other. It’s like if you had a sitcom with a bunch of Newman clones and they never told any funny jokes.

Obviously, Fingerman’s not just going for humor. He’s got a statement he wants to make about marriage, divorce, hippies, metal, Uzbeks and maybe video games. Not video games. Something else is in there. The Internet, maybe.

Oh, Fingerman’s got the guy’s internal monologue down.

It’s a depressing issue, but Moench’s ambitious in that depression. He plays some of the thriller scenes like a melodrama–a guy storming over to have it out with the murderer of his girlfriend–while having Batman moon over Catwoman.

Most interesting is the scene where Bruce Wayne, cowl off, calls Catwoman on the phone and comes off desperate. Moench’s trying real hard at it.

He doesn’t make it. Not with that scene, not with the two or three breakup scenes in the rest of the issue, but he tries real hard. It’s too bad because it feels like Moench doing a course correction for the series, which had toyed with bringing a female compatriot in for the boys.

Sadly, no, Moench just wasted months hinting at it.

As his run winds down, there’s not much left for him to resolve. Batman’s going from pre to post-Crisis very quietly.

Oh, look, Lapham includes a cast list with pictures for Juice Squeezers. What an idea, actually giving your readers a reference when you have a lot of characters.

Lapham borrows from Love and Rockets as far dealing with a large cast of similar looking characters. He makes their actions defining, not their appearance, and frequently uses their names to get the reader familiar.

This issue has the team trying to save the old farm–giving the comic a very Hardy Boys retro detail–but the kid on the farm finds them and then finds one of the bugs. Interesting too is how Lapham doesn’t make the bugs scary or evil. It’s all from the team’s perspective, so they don’t scare.

There are the beginnings of a love triangle too and a rather amusing C plot about one of the kid’s paternal heritage.