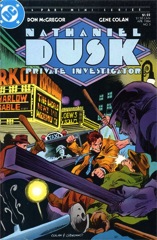 How do you have a private eye comic without a mystery? This issue of Dusk is the perfect example of such a thing. Now, Chandler didn’t always have the most intricately laid mysteries–the investigation mattered. And McGregor has gotten to that point in this mystery. The investigation is the thing. Only, it’s not particularly compelling.

McGregor is very serious about the setting and he’s got some great details for thirties New York. He even sets the series during a cab strike, which figures into an action sequence. Hopefully it’ll figure into the story at some point and not just a set piece. All the pieces are here, all are beautifully constructed, they just aren’t doing much special.

It might just be the medium. Comics lend towards action or dialogue. A detective story needs moments of quiet introspection, it needs thinking.

Still, it’s a good comic with some great art.

I should have known better to read The Fuse, I really should have. There are approximately two interesting things about it. First, the male lead–a late twenties black German guy (it’s the future, get with it)–is bigoted against old people and women. Luckily, his partner is an older Russian woman who I think Antony Johnston is hoping Helen Mirren plays in the movie.

Except Justin Greenwood draws the character a lot like Viggo from Ghostbusters 2.

That likeness is the second, and final, interesting thing about the comic book. Having nothing going for you except bigotry and odd likenesses isn’t much. I’m sure Johnston will deal with the bigotry thin but who cares. There’s no reason to stick around.

The setup–detectives on a rundown space station–isn’t bad. It almost feels like Outland at times but never does because The Fuse is awful.

I both love and dislike this issue. It was one of Marvel’s “’Nuff Said” titles, which actually allows Jones to really concentrate on his pacing. He loves the choppy fast pace.

Sadly, he doesn’t have the artist for it. Romita does much better than I would have expected but the art is still the problem. Especially when the Hulk shows up. It’s supposed to be an awesome sequence but Romita doesn’t break out the action well.

The issue ends happily, abruptly. Given Jones has a lengthy quiet period at the opening, he could have structured it better.

There are threats this issue, but they’re all boring. Jones has a quick plot for no talking, but there’s no room for those threats.

The nicest part is how Jones has just the right amount of pressure on the “Bruce Banner as a nice guy” moments.

It’s successful in spite of the art.

Who’s this Charles Soule guy writing She-Hulk and why is a Jennifer Walters series the one thing Marvel does right much more often than not? Or, if they don’t do it right more often, why do they do it so well when they do it right?

Soule’s approach is simple. Pretend the Marvel Universe is real and wink (a lot) at the absurdity of that idea. He paces the comic like an extended sitcom. Some great scenes, a relatively lengthy present action–the issue doesn’t leave one hungry, except for future issues. It’s kind of a pilot, actually. Soule sets up Jennifer’s new story, sets up the tone for the series. Hopefully he’ll deliver.

It’s delightful because he allows for some cynicism. Jennifer’s client is sort of a jerk. The first scene crushes some idealistic ideas too.