Every once in a while, Garth Ennis must decide he has to do something to remind everyone how thoroughly raunchy he can get. Unlike a lot of his recent work, his raunchy moment in this issue of Rover Red Charlie works a lot like how it worked in Preacher. With witnesses echoing the reader’s plea for Ennis not to take things there.

It’s foul, but the foul isn’t bad. It’s just foul and gross and sticks in one’s mind’s eye even after the page–and comic–has passed.

Of course, having Dipascale’s sweet art for that moment makes it even more intense.

This issue, Ennis introduces a lot. Characters, ideas, about the only thing he doesn’t introduce are new dog vocabulary terms. There are a few, but nothing as memorable as before.

Sorry to be so myopic….

The issue’s solid, formulaic but still engaging. The soft cliffhanger’s too ominous though. 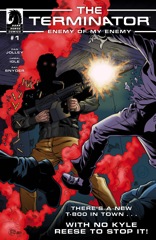 Dan Jolley and Jamal Igle doing a Terminator series. You know what you get? A decent plot, good characters, some awesome art. The way Jolley and Igle are doing Enemy of My Enemy is very cinematic. Igle does a lot of establishing panels. Part of the book is these guys doing a Terminator book and the reader getting to go along for the ride.

But it’s still a Dark Horse licensed comic. There’s a CIA agent on the run picking up assassination work, she comes across a Terminator, she finds herself in the middle of a conspiracy because, apparently, after the first movie the CIA started investigating.

Or something. It’s a standard Dark Horse licensed trope–there was something hidden plot at the time of the movie; it’s finally revealed here. It’s not too bad as Jolley keeps it contained, but it’s still present.

And the book’s better than it. 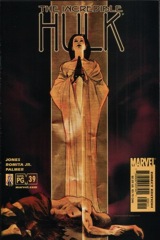 I’m not sure how much more contrived Jones’s setup for the series could be… Maybe if he’d make the Hulk somebody’s dad. But he doesn’t. He makes someone else somebody’s dad.

Once again, Jones doesn’t let Bruce have the issue. One of the bad guys gets the issue and she gets to tell Bruce all about this strange situation he’s found himself in. Of course, if you’re Bruce Banner and you’ve been hulking out for years, strange situations shouldn’t seem strange. But Jones acts like he’s come up with sliced bread.

Is Memento Mori the best of Boom!’s terrible Robocop remake tie-ins? Maybe. It’s definitely the first one where the art engaged. João Vieira has the appearance of an interesting style. Cartoonish, almost. He really doesn’t–he just fakes it on the good panels and the rest are really pedestrian. But until one figures out the art, it does keep the mind occupied.

Speaking of minds and occupation, Mori is the story of Alex Murphy, human cop, as the doctors wipe his memory to install Robocop. Frank J. Barbiere apes countless tv shows, comic books and movies as Murphy runs through his subconscious trying to survive. It’s hideously unoriginal and completely nonsensical. Barbiere fakes having a point to the story.

But the comic does read quickly and one forgives the art problems and the unoriginality as things move along. Barbiere manages to promise something engaging… and fails to deliver.