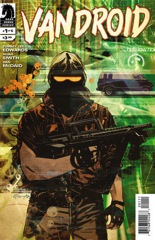 I was hoping Vandroid was going to be about a van with the mind of a killer HAL or Colossus, but apparently it’s just a Terminator knock-off. As knock-offs go, it’s not bad at all. Writers Tommy Lee Edwards and Noah Smith do an excellent job with the eighties setting. Their dialogue’s funny and they’ve got a great roving eye for some of the issue. It’s when the reveal happens, just over halfway through, it becomes clear the comic doesn’t have enough gas.

The art, from Dan McDaid, is good and appropriate for the content. Vandroid feels more fully realized than the narrative suggests. There might be something better to come along, it’s just too soon to tell. The next issue will be the decider.

It’s hard to know what to make of a comic where so little gets established the first issue, especially for a limited series.