This third issue is the pits. Well, maybe not. Fate of Atlantis has been steadily sinking (sorry, had to do it) since the first page of the first issue. There’s no reason to think the last issue won’t be even worse than this one.

The problem, besides Barry’s pencils and composition, is the script. The writers tell most of the story in summary. One night, Indy is on watch so he talks to himself to fill in all the information the readers don’t know but should. He does it another time too. It’s past lazy, it’s incompetent.

Worse, the scenes the writers do concentrate on aren’t any good. This issue there’s a desert tribe and Indy and the girl spend a bunch of time with them. Why? Why is the desert tribe more interesting than the treasure hunt… no idea. It’s just another bad choice.

It’s all a bad choice.

I feel bad for the creators on Robocop: Beta, it’s not their fault the comic fails, it’s just the nature of pointless movie tie-ins. Otherwise it’s not a bad comic. It’s even got a good reveal at the end, it just doesn’t have anything else going for it. Ed Brisson’s able to give it a solid three act structure and Emilio Laiso’s art is decent.

Well, the art is decent for digest size. It’s hard to explain why, but it seems too big for the standard comic page. At a smaller size, it’d be a lot more effective. But it’s still perfectly serviceable art and the way Laiso draws the Michael Keaton character is nice. Not too photo-referenced but still recognizable.

Brisson can’t do anything with the comic because the comic is, as a part of the conclusion, supposed to be disposable.

It’s pointless and everybody knows. 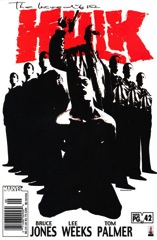 I wonder if Jones had been putting off doing a Hulk rampage because he knew it would be boring under his watch. Bruce finally hulks out big time here–destroying much of the setting from the last two issues–and it’s really, really boring.

Maybe it’s because Weeks’s too realistic and his vision of destruction doesn’t get in Jones’s subtext. There’s no emotion to the destruction, not even forced stuff. It’s mind-numbing and it appears Jones is going to go out on this terrible action scene. It’s not like Weeks is composing the pages well either. He does big panels or full page spreads and it’s just pointless filler.

But Jones doesn’t end things with the destruction or the hard cliffhanger for Bruce. He goes further and shifts focus over to the lady cop, then back again to Bruce. For practically the first time. It’s an amazingly effective save. 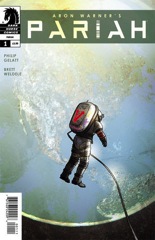 I don’t have time for Pariah. Writers Aron Warner (is he famous? He alone gets his name above the title) and Philip Gelatt devise the most annoying dialogue and narration juxtaposition imaginable and seem to think it’s awesome. It’s not awesome, it’s terrible.

They start a thought in narration, trail off with an ellipses and pick up a totally different subject in dialogue, all in the same panel. I’m not sure what kind of art is necessary to make putting up with such an atrocious narrative device worthwhile, but this comic doesn’t have it.

Artist Brett Weldele isn’t bad. He’s kind of like Ben Templesmith lite. Nothing lite is going to be good enough.

I think they’re trying to be different, to somehow make Pariah immediately compelling and, if so, they don’t just fail, their editor fails too.

Pariah is the kind of comic you’d want to return for cash.