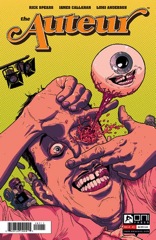 After finishing the first issue, I haven’t got a clue where writer Rick Spears is going to take The Auteur, which is a good thing. It’s an absurdly violent story set in Hollywood, full of awful studio heads, drugged up producers, obnoxious directors and gurus doling out snake venom as cure-alls.

It’s not original in that regard.

The violence is gross out but not realistic. James Callahan’s art is imaginative both with the violence and the non-violent scenes and he’s dedicated to getting the page right. But there’s something almost juvenile about it, like a kid trying to gross out his friends.

So it isn’t original in terms of the art either.

Putting the two things together? Again, not enough to make it original. And, based on the editor’s letter to the reader, The Auteur desperately wants to be original. It’s good, it’s imaginative. Those qualities are enough.