But Conway seems to be writing for his artist, José Luis García Lopez. Not in a bad way; Conway’s not doing quick action scenes and letting García Lopez drag them out. Instead, he’s throwing a bunch of disparate ideas at García Lopez to see how they hash out.

Even before the sci-fi spectacular stuff starts, there’s an amazing fight scene. So much movement.

The female protagonist is more likable, so far, than the male.

It’ll be interesting to see where the creators take the series, since the possibilities are seemingly endless and unconstrained.

Lemire has a great device in this issue–lots of small panels full of conversation to show a rapid-fire exchange. Not sure if it's his own creation but it's a wonderful tool for pacing the reader while still having visually dynamic panels. They're just smaller panels.

The good composition and pacing continues until about halfway through the comic, when it all goes to pot.

Lemire goes for a really cheap ending to Trillium; really obvious, really self-indulgent (he changes styles at one point and I think photoshops in panels from earlier issues, regardless where the panels are from–he photoshops badly). The ending reveals how the series's pacing problems disabled it too much. The characters have changed too much, too quickly and the ending Lemire goes after needs a lot of thorough work.

Lemire ignores the series's finest qualities for its finish.

Oddly, I liked his art here more than anywhere else.

Jones gets the whole cast together and things finally start improving. Braithwaite draws Bruce as this vaguely awkward, aging pudgy guy. It’s a very interesting visualization of the character; it goes to making him seem a little less familiar even. Oddly enough, the second half of the issue has Jones’s most traditional use of Bruce Banner in many issues.

But bringing the cast together–back at Nadia’s roadside restaurant–reveals another big problem with Jones’s run. It’s very small. Same people, same places; every time it seems like Jones is actually building outward, he just turns around and constricts.

He doesn’t even bother coming up with an inventive villain this arc. Since the whole point is to put the characters in the same room again–somewhere he already had them at the end of the last arc–he just needs a disposable villain. 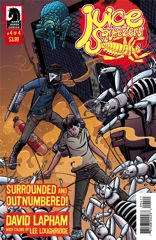 So how does Lapham end the first Juice Squeezers series? Well, but with too much of an eye on the future. He opens up two new story lines in this issue–one out of the blue–and confirms another one will continue.

Otherwise, the issue is good. Well, except when Lapham tugs on the heart strings. He leaves something else open I forgot about. Spending the last two-thirds of this issue setting up for the next series is rather disappointing. The scenes are still well-written, the characters are still strong. The art is phenomenal, particularly a talking heads sequence where one of the kids confronts the teacher who's in charge of the group.

And the first third is awesome. Lapham somehow puts the kids in danger from giant bugs, but the bugs never seem too dangerous. Real death in the comic is unthinkable, something the cast believes too.

The issue mostly works out.