Apparently Mayerik and Trapani are keeping this new style, which is Trapani doing bad faces most of the time. Very unfortunate.

The issue is a mess of alternate realities, barbarians, ducks, GIs and something else. Magicians. Gerber is writing about the walls of reality collapsing and somehow he’s just got to get Man-Thing involved. But he doesn’t until towards the end of the issue and not well.

The story’s imaginative but there’s just no point to it. Man-Thing isn’t a full character in the comic, not with Gerber constantly trying to pull away from him–which is fine, so long as you don’t pretend otherwise. And the Jennifer girl is a problematic protagonist too. She’s the one who’s having the great adventure, yet Gerber can’t stick with her.

So he sticks with the guest stars, then brings in Man-Thing. It’s an okay hodgepodge. Except the weak art.

The issue has some of Ennis’s most ambitious ideas and he doesn’t connect with them. He’s got the female cop–darned if I can remember any of the characters names except Eddie the good cop protagonist and Duke the team leader–getting into an altercation with an attempted rape at a night club. It’s just after she’s had an argument with her sister. They’re in a bar. There are a lot of layers. And Ennis tries to move them all together, but it doesn’t work. His characters aren’t strong enough.

However, there are some really nice scenes in here. Even when the scenes aren’t entirely successful, like the talking heads between the female cop and good guy Eddie at the end. It’s a decent enough scene, paced really well.

Cermak can’t do the action either. He can’t maintain the figures for the fight scene.

The story is about a young woman who a couple lousy boyfriends who starts seducing married men (for the rush). The couple lousy boyfriends are really lousy, one even abusive, and Lapham doesn’t handle her reaction sensationally. He does it calmly (when he really could have her start killing her lovers or blackmailing them or something). So it’s depressing. Well, at first it seems like it might not be as depressing, then he clarifies she knows exactly what she’s doing.

Maybe it’s all the build up cop Roger, who’s the only returning character, and the only one to stand up to her.

It probably could be longer, maybe doubled, but it’s good. 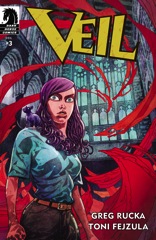 I tried. I really wanted to be wrong about Veil because Fejzula’s style is so unique but no, no way.

Rucka’s hiding this lame story about big business hiring some guy to conjure a demon in the comic, which ostensibly is about the titular protagonist but isn’t at all. It’s about the evil magician, the dumb businessmen, the really dumb mercenaries–these guys wouldn’t have made it to the special forces, they’d be cleaning latrines–and rats. I think Rucka uses the rats because animal cruelty still gets a result. Cruelty to humans doesn’t.

Did I mention the bad dialogue yet? Rucka writes a lot of really bad dialogue here. It might be because he doesn’t know how Fejzula’s going to bring the scenes together. I’ll extend that possibility, though I don’t really believe it. The dialogue’s atrocious.

Rucka doesn’t use Fejzula well either. The art’s interesting, but doesn’t fit.