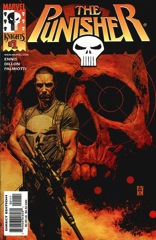 Garth Ennis has a real sense of exuberance with The Punisher. Steve Dillon not as much–maybe he realized how round Jimmy Palmiotti’s inks would make the pencils–but the art’s still good. Every line of Ennis’s narration from Frank is enthralled, though. Even though nothing happens this issue, that narration makes it worth it.

Until the end maybe. Ennis has to address recent changes in the character history and the lines recounting the Punisher’s days as an angel are too jarring. Ennis can get wrapped up in Frank’s worldview but there’s no way to make that angel stuff sound good.

The narration is tempting; Ennis brings the reader over to Frank’s side. The way Frank thinks, the way he plans out his attacks, the mindset–it almost immediately makes perfect sense. Probably because of the awesome opening sequence. 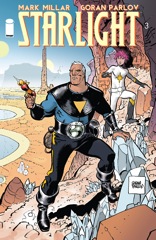 For the third issue of Starlight, things are coming together. Well, not so much things, but Millar’s writing. He’s pacing out the narrative a lot better. There are probably six or seven scenes this issue and they’re mostly good scenes. The cliffhanger is a little abrupt and he spends too much time with the lame villain, but the stuff with Duke is all pretty great.

Except maybe how Millar resolves the big action sequence. There’s this fantastic fight scene with Duke taking on a bunch of bad guys–Parlov does beautiful work with the figures, but also with how he lays out the panels on the page–except then Millar remembers Duke is an old guy and has to get real. The real part’s problematic.

And the followup with Duke; not great. But otherwise, all of Duke’s scenes are great. 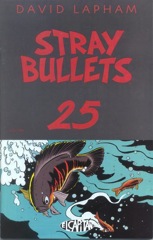 After threatening it since issue five or so, Lapham finally has a pedophile attack Virginia. He appears to be an equal opportunity pedophile because he goes after Virginia’s friend, Bobby, too.

Lapham sets up the issue differently than usual–by usual I mean the usual for when he’s threatening Virginia with rape and possibly murder–and spends the first half of the issue showing her on the run from a truant officer. There’s some better stuff in that part of the issue. The stuff with the creep is weak.

The creep also looks a lot like Sideshow Bob. 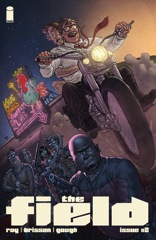 The Field gets better this issue because Brisson turns up the craziness. He also gives Roy a great action sequence–the kidnapping Christian versus some elderly bikers. That action puts the comic on its own level, where something should be funny but it isn’t. There’s no humor in way Brisson writes the comic and Roy never pauses on a comic moment. So to describe the comic, it might sound like there’s humor… and there isn’t.

But Brisson also goes ahead and hints at the big reveal. There’s some kind of time travel going on; time travel or mass hysteria. The protagonist is starting to piece things together. Brisson reveals to him and the reader at the same time. It’s not the most original device but it’s an effective standard to employ.

The hard cliffhanger should be scary and funny, but isn’t. Instead, it just promises further inventiveness from the comic.