It’s kind of a talking heads issue. There’s some action with Frank having to save Dave and he bonds a little with Joan. Ennis has problems working Frank into the humor. He’s the Punisher is the punch line to too many of Ennis’s jokes.

There’s also a lot with Soap and Molly. They don’t serve a purpose in the story at all, so Ennis just fills out with them. They’re another enjoyable part of Ennis’s big Punisher story, which ostensibly should have been about him getting Ma Gnucci.

She’s not a good villain though. So Ennis has to do really awful things around her to make her seem like a good villain. The secret of this series is its shallow depth. Ennis is just doing enough character work to make it seem substantial, but he’s really just trying to get done with his twelve issues. 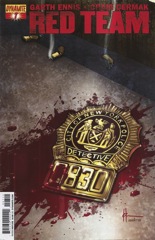 I think they must have wanted to sell it to cable. Ennis does a great season one finish. Not, you know, like a good narrative finish or something. But a good commercial one. You can just see it on the TV screen.

But Ennis has lost his characters. They’re secondary to his big action sequence and it’s not a good one. It doesn’t play well in a comic. Ennis goes with short lines of dialogue and they don’t resonate when being read in a row. There’s not enough content. It’s all flash.

Cermak does a little better with the action. Except his art seems much slicker than before. There’s not as much energy to the comic and it needs a bunch for this last issue.

Ennis peaked early on this book but the conclusion is far worse than one would have thought. The ending feels tacked on and wholly artificial. 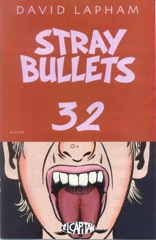 Lapham hasn’t just run out of ideas, he’s now doing reruns. This issue of Stray Bullets reminds of a few others, but in bits and pieces. So less a rerun, I guess, and more a remix.

Some classmates of Virginia–who also remember her before she ran away (in a school district with so much assault going on, wouldn’t there be a lot of runaways and not just one)–are goofing off while waiting in a parking lot and they piss off the wrong guy.

This wrong guy works for the unseen criminal boss Harry.

The guy spends the rest of the issue torturing the kid who heckled him from the car window. There’s actually a chance for Lapham to do something with it at the end and he doesn’t. He goes the safe route, the Stray Bullets route. The comic’s practically a parody of itself.

I read this entire issue without paying attention to the story arc title on the cover. I'm glad I ignored it.

Here's the problem–the art. I wonder how Joe Corroney's art would be if he didn't have to mess around with all the actors' faces. He doesn't do them well, either, so there's no real point to it. The expressions are just terrible because the mouths can't move too much or it won't look like whatever photo he was referencing.

Bad, bad choice. On IDW's part, not on Corroney's.

Still, it's a fun issue. Johnson just writes a little episode where the crew is excited to get off the ship. It's got elements of "This Side of Paradise," some actual personality from Kirk, an ill-advised Return of the Jedi nod. In short, it's exactly what a Star Trek comic should be.

Except for the art, which is just unforgivably misguided.