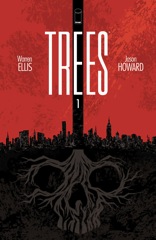 The Jason Howard art on Trees is probably going to be the best thing about it. While Warren Ellis definitely has an interesting idea–giant space aliens who don’t notice the human population and are apparently just gigantic columns (the titular Trees)–he does a roving eye thing with a lot of characters. Presumably they’ll be the cast.

Except the ones in the pointless opening action scene. It gives Howard a chance to show off his range, like later when he’s got some Chinese village guy walking around some hippie walled off city. The comic’s set ten years after the invasion so it’s in the future and there’s some advanced robotics in the future.

But Howard brings a (much needed) distinct freshness to the comic.