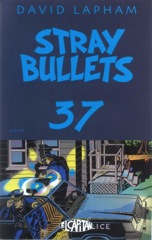 Okay, so the high school arc is apparently all about Virginia going up against that kid who went insane because he had a gay encounter. Actually, it’s rather homophobic. Not just that event and the outcome, but the series overall. This issue has the guy raping another kid (another guy).

Lapham’s nothing if he isn’t cheap. And vaguely homophobic. And really lazy on the art. It’s the worst art in the series ever.

But he’s also got Virginia stirring the pot and investigating and it’s hard not to appreciate having her around. Even if all the high school stuff is idiotic and somehow getting worse. This Bullets arc is set in the early eighties so maybe you didn’t go to jail as a teenager if you murdered someone, which is the implication with the villain.

And why does the comic now have (another) shallow villain? Because Lapham’s given up entirely.