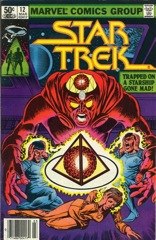 Penciller Luke McDonnell–along with Tom Palmer on inks–does a lot of photo referencing this issue. But he’s only partially successful. Kirk looks spot-on, but Spock doesn’t. And Janice Rand returns this issue; she’s not spot on either. At least she’s not problematic. The work on Spock is downright bad.

The issue references the first episode of the television show, the disappearance of Rand in the first season and then a lot from the movie. There are a few visual cues straight from The Motion Picture.

Pasko’s script moves fast and doesn’t stop for the absurdity speed bumps. There’s a big crisis and the entire thing should have been avoided. Pasko seems to realize it and skips even trying.

He also does a feeble characterization of Rand. She’s an entirely new character from her time on the show; Pasko can’t connect to her.