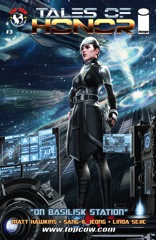 Hawkins does such a good job with the pacing–the way he’s able to split the story off into scenes with auxiliary characters and have his protagonist narrate from her side makes Tales of Honor something special. Only this time Hawkins doesn’t have a natural stopping point; he goes for a hard cliffhanger but it’s got to do with a mission, not the commander or the speaking cast.

It cuts down on the effectiveness. Also problematic is that Jeong art. It’s so painfully digital and so uninventive, it needs Hawkins’s plotting and narration (presumably from the source novel) to keep things moving. But the finale has the aliens and Jeong is terrible at the living things.

Still, the mid-section plot development and the character development are just phenomenal and keep Honor compelling on multiple levels. Hawkins just needs to stop leaving his main cast off page for the cliffhangers.