There’s a lot of information in this issue. There’s a recap of the last issue and there’s a big history lesson of the Mice Templar world. That history lesson is rather confusing. Glass brings in a lot of names and ideas–the Oeming art is really good for these sequences. But it’s still a long history lesson.

The comic now follows a young novice and his mentor. I can’t remember the names. They’re mice, obviously. Glass does a great job with the kid, who’s trying to deal with the death of his friends and family and the enslavement of his townspeople. The comic tracks the two of them on their journey. There’s a little about the new settings, but never too much

Glass and Oeming are clearly invested in Templar. The enthusiasm wouldn’t be enough but Glass has that strong character development and excellent plotting going too. 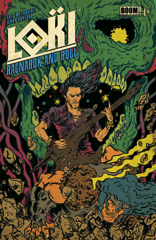 Loki’s a trickster so it’s all been a trick! I won’t spoil it and say how or what has been a trick, but the biggest trick has to be Esquivel’s–he got me to read the whole series.

The problem with wrapping up the entire comic in a reveal–and by entire comic, I mean all four issues–is there not being anything else going on for said comic. Esquivel wasted the last couple issues; he throws in some desperate attempts at character development here, then ignores them a page or two later. All because of that amazing reveal.

As reveals go, it’s not bad. But there’s nothing else in the issue or comic. I remember the first issue being really tightly told and then the series went down hill. This final issue would be the absolute bottom, with Esquivel wasting many pages on lame action scenes.

It’s a pointlessly double-sized issue. The extra pages give Conway time to get in fight scenes between Firestorm and both villains–and the art on the fight with the Hyena does have a great double page spread–without having to sacrifice the character development.

Ronnie and the girlfriend, Doreen, go on an actual date. There are big problems with the date, both in them walking into a supervillain fight and in now Conway forces too much ominous foreshadowing, but it’s at least a scene between two people where they exhibit personalities.

There’s some really good stuff with Professor Stein too. Conway roams a lot as far as protagonists for a scene. It’s too omniscient to let the comic have a personality, but it’s definitely effective for engaging storytelling.

The problem is there’s just too much in the issue and it ends without having accomplished anything. It’s inflated but empty.

Winterworld is about some guy who has a teenage girl sidekick in a post-apocalyptic frozen wasteland.

Writer Chuck Dixon has a very strange approach to the plotting–every scene is a glimpse of a full scene without any real transition between them. It reads like it’s on fast forward. Luckily, Dixon has Butch Guice on the art and it doesn’t matter how fast it reads, Guice’s panels are gorgeous.

Particularly great are the frozen battleship and then a chase sequence where the protagonists are on the run from some bad guys on motorcycles. Maybe it’s like The Road Warrior but who knows because Dixon doesn’t spend time on anyone but the leads. And all they do is bicker and try to survive.

The surviving stuff isn’t particularly interesting; the bickering passes the conversations. Dixon can write so maybe the pacing’s intentional. Or he just knows Guice will carry it.