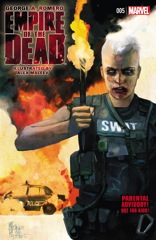 This issue, the last one of the “first act”–either to give Romero time to finish the script or Maleev time to get ahead on the art–starts out fairly well.

The scientist, the zombie SWAT lady, the little kid, the scientist’s male friend (the gladiator wrangler), they all have a somewhat interesting sequence together. Romero starts to explore that intelligent zombie thing he’s been playing with for thirty or forty years.

Then he flushes it to set up all the subplots for the next act. This issue reads more like the first issue of an arc (or series) than the last one in an arc. There’s no resolution because Romero knows he’s coming back. So he’s trying to keep the reader enthusiastic.

But it all backfires because there’s no real content to it. And the pacing is terrible. And the vampire politicians are just a silly idea.