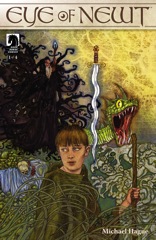 When I read a comic from Dark Horse called Eye of Newt, even if it’s set in olden times and has dragons and wizards and talking cats and cheap Gollum knockoffs, I expect one thing. I expect an Aliens tie-in.

But some kind of tie-in to anything would have really helped the comic, which is clearly a labor of love for writer and artist Michael Hague. He draws some gorgeous dragons and wizard seals and so on. Not so great at the people, who seem way too two dimensional, or the scenery, which seems underdeveloped. But the dragons look great.

And he loves the story of Newt, a wizard’s apprentice, who has problems on his way to becoming a real wizard and worries about pissing off his mentor.