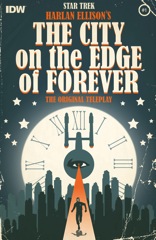 I guess I didn’t realize–or care–how much Harlan Ellison’s original teleplay for the classic “Star Trek” episode The City on the Edge of Forever got changed.

From the first couple pages, it certainly seems like IDW is mounting an ambitious adaptation. Artist J.K. Woodward paints a mean Enterprise and writers Scott Tipton and David Tipton certainly set up the characters well. Not the principal cast, but the supporting characters.

Then the regular crew shows up and the problems start showing. Woodward spends too much time on likenesses, while the Tiptons’ script doesn’t do enough with the characters. As a comic, City on the Edge of Forever is way too dedicated to the source material. Adapting the original script, while an interesting project, is somewhat short sighted. There have been thousands of “Star Trek” stories since… something in them might synthesize well.

The coolest thing so far is Yeoman Rand’s inclusion.