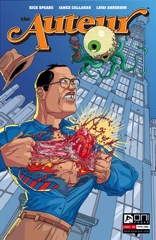 What do you do when your last issue goes off the rails? Well, if you're Rick Spears and you're writing The Auteur you do something really odd.

You pretend it never happened. Oh, there's some fallout–the producer protagonist, Rex, feels bad about the events in the previous issue, but Spears quickly moves him into a new activity. He's romancing his new leading lady–as part of the guilt, he's making romantic comedies now–only she's rejecting him so there's this hint of danger given Rex does know some serial killers.

Well, one. Who used to be a main character in the comic, but Spears has apparently dismissed.

There's a lot of irreverent humor and Spears moves the comic at a breakneck pace. Callahan is doing these tiny panels to try to get in all the information.

Is it a successful issue? Definitely. Does it mean Spears has fixed the series? No idea.