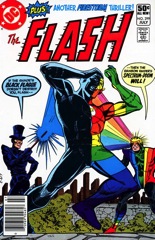 It’s too bad, but not even the Infantino art can make this issue particularly worthwhile. There’s a real lack of personality to all of it; Bates is just building towards the big event with Barry’s evil father (I wonder if he’s secretly Reverse Flash, could he be) in the next issue. Not even a scene with Barry’s dad holding a gun to his head (while Barry is sleeping) has any weight.

Worse, Bates gets rid of all The Shade for most of the issue. The Flash teaming up with a supervillain might actually be interesting but The Shade’s barely in the issue. More time is spent on Barry verifying The Shade’s story than the odd couple teaming up.

And the big action finale is lame–it’s color effects, there’s nothing for Infantino to do.

Conway then tries something strange with the Firestorm backup–an average criminal versus Firestorm. Sadly, it doesn’t work.