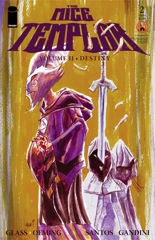 There’s a lot of material this issue. Plot developments, character developments, but Glass still tries to deliver a somewhat action-packed narrative. The opening–the A plot–has the heroes held captive by moles; there’s humor from Cassius who mocks the moles, a fair amount of suspense (the moles are apparently under siege) and then some payoff on that suspense.

This opening is fairly big in terms of adventure. It certainly seems like Glass could carry the whole issue with it; instead, he goes over to the capital for the B and C plots. B plot is Kirac’s friends and family, C plot is political intrigue. There’s more to it–and Santos does a great job with making these machinations scenes particularly dramatic–but it has its own cast. Glass moves these plots together beautifully, but it’s still hard to transition from the protagonists to them.

Destiny is confidently, quietly and steadily building itself up.