Just before the issue ended, I realized Glass had finally delivered what I’ve been waiting for on Destiny–the full forward motion. He’s done with the exposition–even his third person narration is sparse; it immediately informs the reader of the setting. The scenes and characters do the rest.

And Glass is moving away from exposition in a comic with a full flashback to the true story of the fall of the Templar too. The timing of the flashback in the issue is essential and has to do with the character development going on. Karic isn’t just his own character here, he’s separate from his friends and family. That other plot line? It feels liberated too. Destiny is moving forward.

There’s also a lot of fantastic action in the issue. Glass gets to do fight scenes of various flavors and just a bunch of movement. He and Glass’s work is infectiously invigorated. 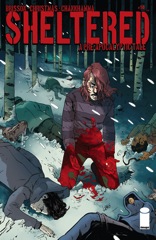 I’m all for some manipulation for the sake of narrative effectiveness, but Brisson takes this issue too far. He’s got his two plots going–the kids in the compound and then the freight delivery guy trying to get to civilization–and he tries to have his cake and eat it too.

Or however the saying goes.

Worse, Brisson pushes too hard with the kids. Way too much immediate foreshadowing, way too much effort in getting the reader to try to guess what’s coming next. That cliffhanger is actually something of a surprise because it’s such a pointless one, it’s unclear why Brisson would bother. Except to try to manipulate the reader. And he’d already done it with his other plot so why go for both? Especially when one cheapens the other.

The issue does have some of Christmas’s best art; he’s getting better and better. But the comic’s a mess.

It’s a good issue for Bates and Infantino. Bates comes up with a lot of set pieces, but doesn’t hurry them. Infantino actually has time to make them visually interesting.

This issue has the big reveal with Barry’s evil dad and it’s only about six issues too late. Maybe five. It would have been better if Bates had gone straight from the car accident to the Golden Glider issue to this resolution. None of the previous foreshadowing delivers because Bates revelation isn’t ingenious, it’s contrived.

Speaking of contrived–why doesn’t Flash call a super friend for help? If Flash is fighting a supernatural power, can’t he just call the Spectre or Dead Man?

Bates’s logic problems culminate with a huge one at the end.

The Firestorm backup has Pat Broderick on pencils and Adrian Gonzales on inks; there’s some great art here. And besides the recap, Conway’s writing is strong.

So what’s the Spread? Well, the monster in Spread is a mix of The Thing and maybe Crossed. It killing you turns you into a shape-shifting zombie monster. But the hero of Spread is a mix of Lone Wolf (with the requisite messiah baby for Cub) and Wolverine. Except, of course, Wolverine’s already a riff on Lone Wolf.

In other words, there’s nothing much original in Spread. It’s possible writer Justin Jordan thinks using an unexpected narrator is fresh, except for, you know, The Road Warrior. But it’s not a bad remixing of old material. The art from Kyle Strahm is awesome. Some of the unoriginal elements might even be his fault, not Jordan’s.

All together, they don’t add up to much. The post-apocalyptic setting isn’t compelling; everyone has those. The anti-hero hero? Everyone’s got those too.

While Strahm’s art recommends Spread, it doesn’t make it worthwhile.