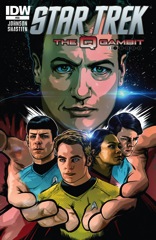 I’m having a hard time trying to figure out how to talk about this issue of Star Trek. Not because the comic is all of a sudden doing well or good–and not because new artist Tony Shasteen is doing anything special–but because the comic has finally given in to itself.

Here we have the new Star Trek franchise crossing over to the “Star Trek: The Next Generation” franchise and, if one can guess from the cliffhanger, its spin-offs. In other words, Star Trek the comic has become the desperate cash grab it was always meant to be.

This issue has Jean-Luc Picard in a small role. Johnson writes him great. You can hear Patrick Stewart. Similarly, Johnson writes Q great and he also writes the regular cast better than his usual too. He’s finally excited; he’s not updating something old.