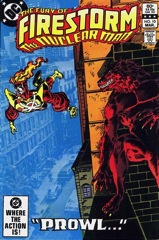 The issue opens with the Hyena hunting a bunny rabbit; Broderick and Rodriguez do a great job on the bunny rabbit, but it looks like there are some problems with the Hyena. So the issue starts right off with some questionable art and then it just gets worse.

Broderick does fine with the action scenes, does fine with all his composition but he and Rodriguez’s detail on the regular folks this issue is terrible. And the Hyena is a problem throughout; it’s too slick to be convincing as a giant were-hyena. Not enough fur detail, I guess.

There’s also way too much detail on teenage Doreen’s sheer nightie. It’s a weird choice; someone should have caught it.

Otherwise, the issue’s fine. Not Conway’s finest hour–the Hyena’s backstory is too convoluted and tied Peter Parker style to Ronnie’s civilian life–but he’s still got some nice character moments and Firestorm action throughout.