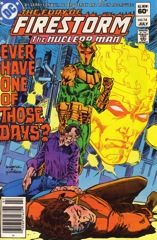 Until the silly eighties toys show up at the end–the villain rides around in absurd tank–it’s a decent enough issue. Well, the villain–Enforcer (Conway remembering his old Spider-Man days perhaps)–is lame, but some of it might be the art. Broderick starts the issue strong and then loses his grip by halfway through. This time it’s worse than bad faces, it’s goofy bodies and so on.

But the issue itself isn’t bad, Conway’s initial plot–Ronnie and Martin getting the newly unemployed scientist a job at Ronnie’s burger joint–works. He just keeps adding on to the plot until the issue is bloated. He doesn’t give anything enough time and keeps throwing in hints at future subplots.

The action finish–that tank–is silly and poorly conceived. All this action in a confined space cuts down on action possibilities for Broderick.

It’s a rather problematic issue.