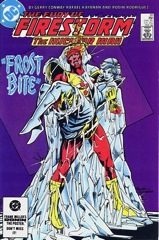 Conway gets through most of the issue before the problem becomes clear–he doesn’t have much of a story. He hints at future stories, with Ronnie having girlfriend troubles, Lorraine Reilly (Firehawk has joined the series as a regular) having family issues, Martin’s ex-wife stalking him again and so on and so forth, but there’s nothing going on here.

Oh, wait, Killer Frost escapes from prison. It’s a lengthy escape sequence and relatively well-done, but it’s just a prison break. Maybe if the character weren’t so shallow–and the way Conway writes her monologues about being rejected by men so painful–it’d go over better.

Conway’s definitely trying with his regular cast and now even developing Firestorm separate from Ronnie and Martin, and there’s Kayanan’s pencils. Firestorm has never looked better. Kayanan handles everything–locations, civilians, superheroes–beautifully. Kayanan is even able to make Killer Frost a welcome guest star, he illustrates her so well.