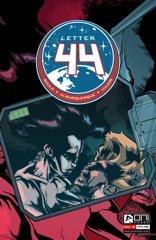 Soule ups the intrigue this issue. Not so much out on the Clarke as they investigate the alien presence–though there is an ominous asteroid to explore–but on Earth. Soule concentrates on the political intrigue and it’s really effective.

Cynically speaking, one could describe Letter 44 as a mix of Tom Clancy, Michael Crichton and Arthur C. Clarke. This comic is only indie because the industry can’t figure out what to do with an accessible title. And Soule goes out of his way not to just make it accessible, but also enjoyable. There are at least two great comic moments in this issue.

Alburquerque’s art is getting better too. It steadily rises throughout the issue; the big shock panel at the end is actually half excellent and half mediocre. He has movement down, but not how to deal with detail in movement.

The comic is a slow, strong burn.

Wyatt has a big problem with the narration. Dredd doesn't narrate, some kind of omniscient third narrates and it's often too expository and stilted. Another obvious problem is Dredd. He's not a character so much as an occasional jaw; writing Dredd to match the movie means somehow imbuing the comic with a sense of Karl Urban's performance. Without it… no go.

So Wyatt doesn't deliver much. Artist Henry Flint does better, though he has some shaky sequences as well.

Paul Kupperberg fills in writing the last arc of the Black Bison and Silver Deer arc–which I affectionately call “the attack of the Native American super-terrorists.” Silver Deer proves so evil she even horrifies the Soviets with her behavior.

There’s an awkward sequence with the superheroes in their civilian identities going to a political reception. Kupperberg skips the scene where Lorraine explains how she’s met Firestorm’s two halves. The senator father inexplicably goes along with it.

But the Kayanan and Rodriguez art is often great and always above average. Even with the odd action finale–flying characters in closed spaces never plays well on the page; it all works out reasonably well.

Until the last page, when Kupperberg rips off the end of Superman III–Firestorm returning the Statue of Liberty to its proper form. The rip-off is vaguely okay but then Firestorm goofily salutes the statue.

Oh, no, Asylum isn't over yet. I had thought this issue, which awkwardly ends with the heroes driving off into the sunset to hunt down Lucifer and his minions as they wreck havoc on the world of man, was the last one.

Too bad. With Bruce Jones completely off the book, the dialogue and plotting takes a couple more hits. Sandy King and Trent Olsen's dialogue is real bad, though given the subject matter, no one could make it much better.

The writers get way too confrontational about validating the religiousness of the concept and skip over all character development. The lengthy final montage, with the guys reviewing their mission, doesn't offer any new content.

The Manco art helps considerably but even he's rushing to get done with this comic (this issue is his last). The double page spreads unfortunately get some of the least detail.